In 1904 a report by the British Consul in Congo, Roger Casement, provoked a scandal that rocked Europe and the USA. And this was due to a campaign waged by a young Liverpool shipping clerk.

Edmund Morel was born in Paris in 1873, but when his father died four years later, his mother took the boy back to England. Morel went to school in Sussex, and at the age of 18 he got a clerical job in Liverpool with the shipping company Elder Dempster, which mainly served the ports of West Africa, and was involved in Congo’s rich rubber trade.

A committed Quaker, Morel became deeply concerned about the damage that he believed British trade was doing to African culture, especially the rubber trade in Congo. On trips to Antwerp for his employers, Morel was supervising the loading and unloading of ships, and noticed that although they were coming back from Africa with holds full of rubber and ivory, they had gone out with cargoes of arms and non-trading goods. With nothing to trade, how were the merchants getting hold of such profitable cargoes? The answer, inevitably, was slavery, slaughter and atrocity.

‘I had stumbled on a secret society of murderers with a king for a partner,’ Morel wrote later.

It turned out that Leopold II, king of the Belgians, had grabbed Congo as his own personal colony in 1884, had sent troops out there and had created a forced labour camp on a massive scale. The rainforests of Congo were full of rubber – which in 1890, became the new gold. Tapping wild rubber was difficult, so Leopold’s agents used brutal force to get the Congolese to collect the stuff. Women would be abducted and kept in chains to force their husbands to gather rubber; boys would have their hands cut off and other mutilations. If villages resisted Leopold’s wishes, his Force Publique would destroy the villages and kill the people; for proof, officers demanded to see the amputated right hand of every corpse. 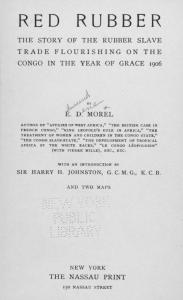 Morel wrote a series of articles on the Congo Scandal in 1900, and after having to resign from Elder Dempster, became a full-time journalist, and set up the Congo Reform Association in 1904. He took a leading role in several other campaigning bodies, and recruited support from the likes of Arthur Conan Doyle, Mark Twain, and Joseph Conrad (who wrote Heart of Darkness having seen the atrocities for himself). Eventually the British government sent Casement to investigate, and the report was so shocking that the original was never published. Leopold II, however, was forced in 1908 to sell his colony to the Belgian government (at vast cost) and the whole shameful horror was swept under the carpet.